From a young age I’ve been interested in learning Japanese. When I was young most of the cool video games came from Japan, and if you knew how to read Japanese then all kinds of new and mysterious games were available to you.

This curiosity lead to me being involved with the ROM hacking scene throughout my high school years. I never ended up making anything of note - to be honest, I mostly inserted crude language into wholesome games. But there was a group of dedicated individuals that I followed and chatted with that spent their time translating various NES and SNES games into English. I’ve always been fascinated by the technical proficiency that it takes to convert a game from one language to another without any support from the original developers. 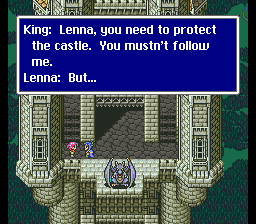 I tried to make my own way through a few games, but never got too far thanks to only having a small traveler’s Japanese to English dictionary as my sole translation aid. While I was able to translate a word here and there, anytime I came across kanji I was dumbfounded as to what it was trying to tell me.

When I was in University I took a semester of Japanese and learned a bit of katakana and hiragana, but then the class ended and I never really thought about it again. That was until I took a trip to Japan a few years ago. Before the trip I spent a few weeks trying to brush up in Duolingo and got to the point where I felt like I could say a few phrases that could come in handy. I probably butchered said phrases, but I think I was pretty good at saying ”sumimasen!” as I frantically dashed through train stations.

A few months ago I thought to myself “I know plenty of people that speak more than one language: why can’t I?” This lead me to I purchase a year long subscription to Lingodeer and I have been practicing daily ever since. I’ve heard that solely practicing via an app isn’t sufficient regardless of how dedicated you are, so I figured I would play through the Final Fantasy V Pixel Remaster that was just released in Japanese. It seemed fitting considering that it was the first fan translation that I ever played. It also had been so long since I last played the game that I had forgotten large parts of it. 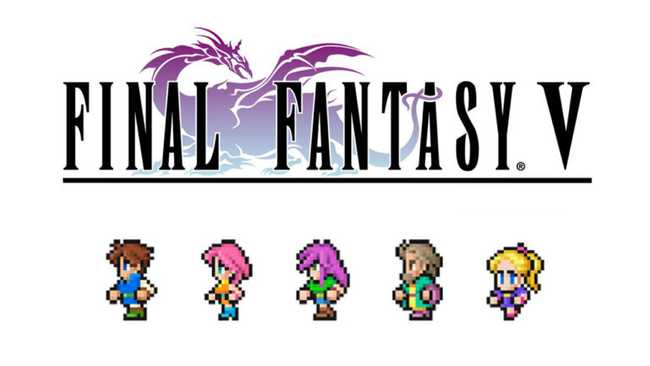 Since the game was being released for iOS I figured that I would play it on my iPad Pro. I’ve had the iPad for about half a year and was mostly pleased when I used it, being well aware that it’s not really a full-fledged computer. It works well for simple webpage scrolling and reading books. I had read recently that improvements to iOS alongside newer hardware was making them into better multi-taskers, capable to replacing a computer. I figured running a 20+ year old game alongside with a Japanese dictionary app and a note taking app would be something that it was capable of, and a big perk would be being able to draw kanji with the Apple Pencil.

Drawing kanji so that I could find their definition worked great; however, everything else was pretty shaky.

As mentioned above, thanks to a strong selection of apps including Kanji Lookup and Shirabe Jisho, the iPad has a thriving ecosystem that ensures you’ll pretty much always be able to find something that suits your needs. I went through several different dictionaries before settling on the two that I chose and they both worked quite well.

The Apple Pencil is wonderful for looking up kanji that you’re unfamiliar with. I started out by searching through the kanji radicals and counting how many swipes were in the character that I was trying to decipher, but I found that this was a time-consuming process. Drawing kanji directly on the iPad was much quicker and gave me a better idea of how to actually write them. 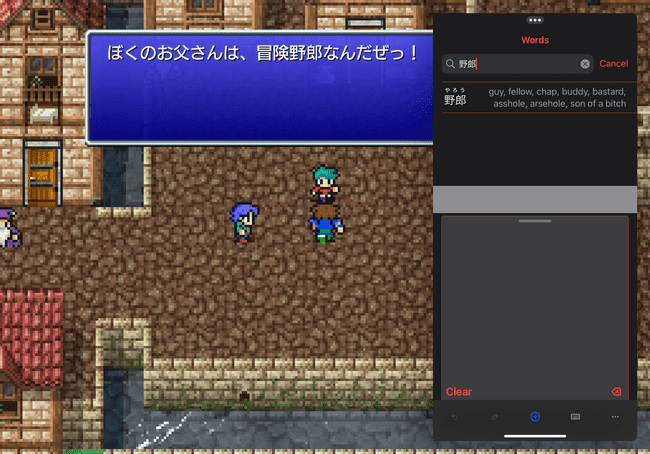 Looking up kanji while still playing the game

I have a keyboard attached to my iPad, drawing the iPad’s form factor closer to a traditional computer. iPadOS has some handy keybindings that be enabled to let you use the caps lock key to switch between languages. I found this incredibly helpful when jumping between English and Japanese as I went from writing in my script file to looking up unknown words in the dictionaries.

Although both dictionary apps that I ended up using are quite good, I wish I could have used Shirabe Jisho for everything - I found that the kanji that I drew were more easily understood by Shirabe Jisho than Kanji Lookup. But thanks to how iOS deals with on-screen keyboards and how Shirabe Jisho makes extensive use of them, half of the screen was obscured whenever I tried to find or draw kanji. Thankfully Kanji Lookup would let me draw the kanji directly in an input on the slide over app, although it didn’t recognize characters as easily as Shirabe Jisho. 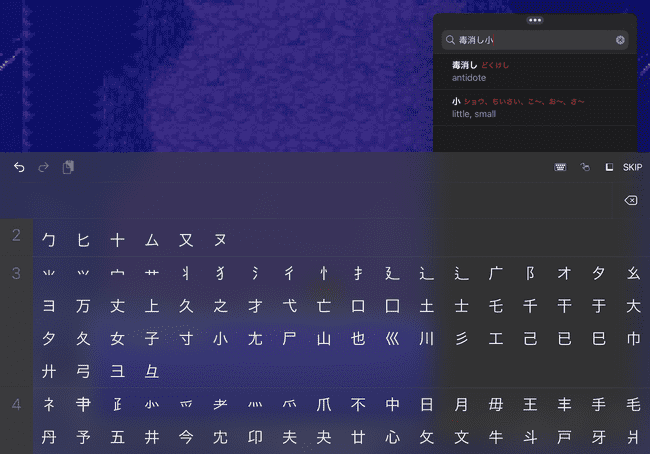 When I first started playing I set up one screen with a split screen view of a dictionary app alongside Pages. I figured this would let me write the English script after I had finished translating with the dictionary. I had to give up on this after a short while though. Even with just three apps running on the iPad, Final Fantasy V would unload itself from memory as I jumped between my two screens.

This was the first hint to me that trying to treat the iPad like a standard multitasking computer was going to be a bit of a pain.

As I continued to play I ended up using iPadOS’s Slide Over view, which places your chosen apps to the side of the screen. These can be swiped from the side or activated via a keyboard shortcut. The app ends up sitting on top of the fullscreen app that you’re currently running in a width that is similar to what you’d see on a phone. 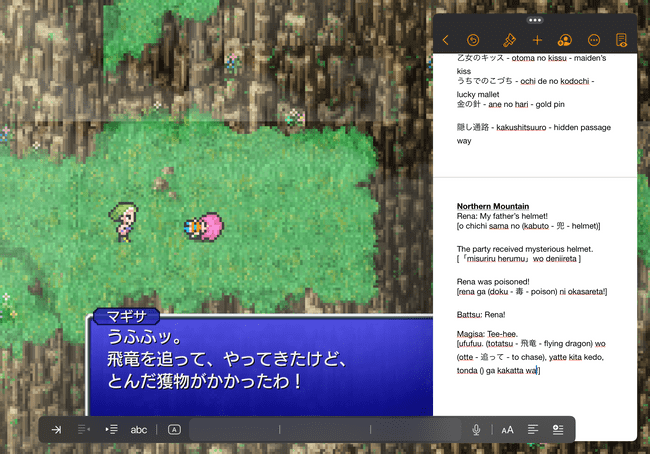 Relying on Slide Over extensively feels awkward - when switching between three separate apps it would take a lot of shuffling to get from app to app even with keyboard shortcuts. Switching between apps using touch controls was even worse and would sometimes lead to accidental taps on the game, causing me to miss whatever dialogue was on the screen.

Slide Over also suffers from memory management issues - while it let me keep Final Fantasy V in memory, the dictionary and note taking apps would lose their state as I jumped from app to app. This caused the apps to reload and sometimes even crash. I can’t count how many times I went to write a sentence that I looked up in the notetaking app before realizing I needed to look at the dictionary again; however, the definition was gone when I returned to the dictionary.

Annoyances such as this made me feel like I was never really in control of the iPad - nothing stayed where I wanted it to. By the end of the game I was really missing my Microsoft Surface. If I was playing on a Surface then I wouldn’t have had any of these problems.

But did it work?

Playing through the game definitely forced me to practice my Japanese comprehension. It was worthwhile and I plan on playing through another Japanese game in the future, but I won’t be playing the game on the iPad. 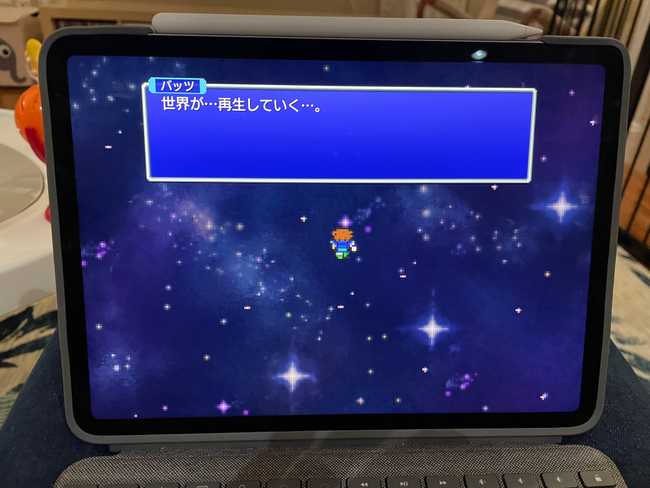 I managed to beat the game while improving my language skills

I’ll probably the iPad handy so that I can look up kanji quicker; I haven’t been able to find anything for Linux or on the web that comes close to Shirabe Jisho. For the game itself, I think that I’ll use a traditional computer so that I can tile multiple windows and feel easy in the knowledge that they will behave in a predictable manner.

The iPad is very good at doing one thing at a time. It played the game well, it took the notes well, and it did a great job with the dictionaries. But when all three were tasks were combined it made for a frustrating experience that didn’t feel as polished as I’d expect from a device made by Apple.

Apple has had years to improve the multi-tasking experience on iPadOS, but it still feels like death by a thousand paper cuts. I had hoped with the launch of M1 powered iPads that the experience could end up being something like what I had with my Microsoft Surface, but it still falls short.

Some might say that I’m asking too much of an iPad, but to be able to take notes, use a dictionary, and play a 30 year old game doesn’t feel like a big ask to me. If Apple wants the iPad to be taken seriously as a multitasking device then they have to fix the issues with memory management and stop suspended apps from crashing and losing their state.

Maybe I’ll pick up another Surface someday, the new ones are looking pretty nice…