Ever since I played Secret of Mana on the Super Nintendo I’ve been a big fan of the Mana series. The colourful world, whimsical music, and being able to play with my friends had me hooked right away. It quickly became my most played game on the system. I was incredibly disappointed when Trials of Mana (then known as Secret of Mana 2) was never officially translated and released in North America. I got to eventually enjoy it thanks to Neill Corlett’s fan translation, but I couldn’t resist getting the Collection of Mana for the Switch so that I could finally play an official version of the game.

Since it has been a while since I’ve played through Secret of Mana and Trials of Mana I figured I’d work my way through the whole trilogy. I just completed Final Fantasy Adventure and was pretty impressed with how well it has aged considering it’s nearly 30 years old and developed for low-powered mobile hardware. I wouldn’t call it my favourite game in the Mana series, but it holds up very well. 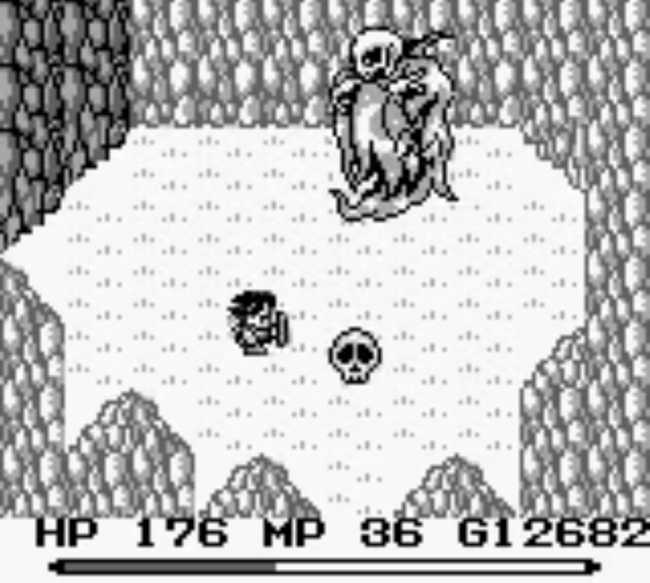 Lich makes an appearance as one of the later bosses

There’s a lot to like about Final Fantasy Adventure. It’s a straightforward adventure that doesn’t demand too much of your time, which is something that I appreciate more and more nowadays. Unlike many of its role-playing contemporaries from the early 90s it doesn’t require a ton of repetitive grinding or unfair time-sinks. (I’m looking at you, the last dungeon of Final Fantasy 3.) Since you can save at any time you shouldn’t have to repeat 15 minutes of gameplay just because you accidentally died.

There is a good variety of weapons and magic available to the player and these help to keep the gameplay fresh as you traverse through the overworld and various dungeons. Since leveling up happens relatively frequently and MP replenishing elixirs are plentiful I didn’t feel like I needed to conserve my magic, which is nice as some games make you feel like you should only use magic when you’re battling a boss.

The game world is also very well designed and I never felt like it was unclear about where I needed to go and what I needed to do. I did look at a walkthrough once or twice just to see how far along I was in the game, but didn’t need to rely on it to solve any obtuse puzzles or to tell me where to go on the overworld. 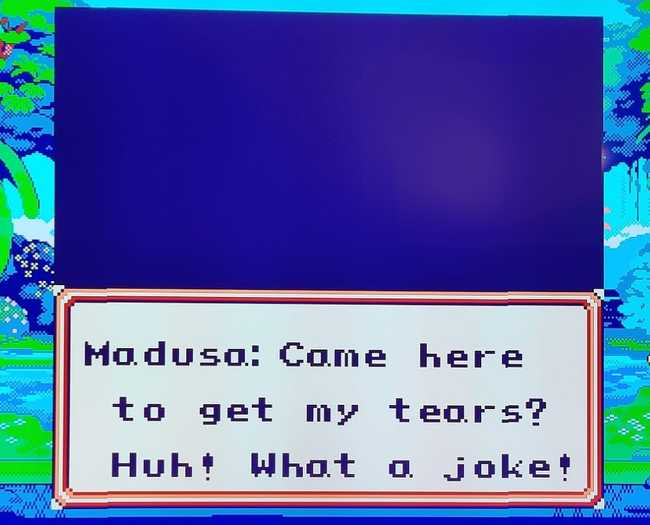 The translation is about what you’d expect from an RPG from the early 90s - Medusa became Madusa here.

The UI for changing weapons feels a little clunky and I’m not to sure if this is a problem with the Collection of Mana port but sometimes the player’s input seems to get ‘stuck’ in trying to choose options and you’ll fly right over what you intended to select. Since there are numerous places where you need to switch weapons in order to defeat certain enemies or bypass obstacles this can end up feeling cumbersome after a while.

The game also looks and sounds like more of a Zelda clone or Final Fantasy offshoot than the other games in the series. While there are familiar creatures such as rabites, moogles, and cartoonish ducks the majority of the game looks and sounds like any other Game Boy RPG. I don’t think the development team can be blamed for this as they were working under the constraints of the Game Boy.

The enemy and ally AI is also pretty terrible - enemies randomly wander around the screen and most of the time can be easily avoided. This makes it so that most battles involve trying to get as close as possible to the enemy and then spamming the attack button. The boss battles were fun since there were projectiles to be dodged and patterns to be learned, but when it comes to fighting the game’s normal enemies it’s a very underwhelming experience. Thanks to the uncontrollable ally AI a few puzzles can be more frustrating than they need to be - your ally will repeatedly end up destroying an enemy that you needed to use to solve a puzzle.

I thoroughly enjoyed playing Final Fantasy Adventure and if you’re a fan of the Mana series I heartily suggest playing it. Despite its age and being on such underpowered hardware it’s still a fun game. If you’re not a fan of the Mana series but are interested in SquareSoft’s older games it’s also well worth your time. If you want to play something similar to Links Awakening but with more weapons and magic then I’d suggest you give it a playthrough as well.

If you’re wanting to play the first game in the Mana series but don’t want to go all the way back to the Game Boy there is a Game Boy Advance remake of Final Fantasy Adventure called Sword of Mana. If even that seems too old for you then there is an even more modern remake called Adventures of Mana available for Vita, Android, and iOS. Both seem to have been well received but I haven’t played either.